As the foremost expert for the Nordic versions of Dracula, I was invited to contribute an introductory essay for this volume with the first complete translation of the text of the Swedish Dagen serialization (1899-1900), that counted over 271,000 words. My essay deals with the various discoveries related to the earliest Dracula serials. It attempts to demonstrate that the Swedish serializations probably were the result of the growing international cooperation of the press during the 1890s, rather than an enterprise managed and authorized by Bram Stoker. Moreover, I substantially contributed to the annotation of the translation, and provided a license for a series of edited illustrations.

When Powers of Darkness was published, the buzz also reached Sweden and triggered the discovery of an even older Swedish newspaper serialization based on Bram Stoker's Dracula. I got hold of high-resolution scans of the original publication and was surprised to see that these 1899 newspaper editions had been illustrated with pen drawings. The linework did look a bit fuzzy on the scans, though, and it took a lot of work to restore its original vigor and clarity. Coloring the images added atmosphere and vivacity. The book with 55 images, and introductory essay and translated fragments to accompany the images was published in Ocober 2021 as a hardcover volume after a successsful crowdfunding campaign.

The following four E-books can be downloaded for free from the Archive page.

This E-book, published by the renowned Cluj University Press (Presa Universitară Clujeană), contains the abstracts of all presentations made at the 'Children of the Night' International Dracula Congress in April 2021. Shortly before the final publication, I did the final editing for text and illustrations. PDF format,  with 154 pages A4, 39 abstracts,  and over 200 illustrations, including portraits of all contributors, selected slides from their presentations, and an illustrated history of the congress series.  ISBN: 978-606-37-1121-3

This E-book with Dracula-related essays, that will be available as a printed edition as well, was published by Transilvania University Press at the start of 2022 as a special issue of the Bulletin of the Transilvania University of Brașov, Series IV (Philology and Cultural Studies). This volume in PDF format with 250 illustrated pages was edited by Magdalena Grabias (Maria Curie-Skłodowska University, Lublin, Poland), Cristian Pralea, Florin Nechita (TUB, Brașov) and me. For the print edition, I did the final editing. ISSN 2066-768X.

This free E-book was published in December 2021 under my own Rainbow Village/Moonlake Editions imprint. As the title states, it deals with a number of trends and topics in the Swedish version of Dracula that had not been sufficiently discussed till then, due to the lack of a publicly available translation. This dossier with many text fragments translated from the Swedish complements my contribution to the Bulletin of the Transilvania University of Brașov (see above), entitled "Mörkrets Makter's Mini-Mysteries."

Another free E-book released in December 2021, again using my own  Rainbow Village/Moonlake Editions imprint. This text deals with hypnotism, thought-reading, spiritualism, and other esoteric phenomena that were intensely practiced and discussed in London during the Victorian Age. My essay traces with which scientists and opinion makers Bram Stoker was in touch, which books and articles he may have read, and how this influenced the writing of his novel Dracula.

This was my first book project, presenting Stoker's classic, illustrated with a series of ca. 40 photo compositions I had produced in my studio, together with a group of models and studio interns. In spring 2011 I wrote an introduction, then followed up with searching for the real location of the imaginary Castle Dracula. I finally found it when the book was almost ready for publication; then, I discovered the true lifetime identity of Count Dracula as well. The book was presented at the London Book Fair in April 2012, then at the Bram Stoker Centenary Conference in Keats House, memorating the centenary of Bram's death, where I met Elizabeth Miller, Dacre Stoker, Clive Leatherdale, Bill Hughes, Marius Crisan and Sam George. It was a great start into the world of Dracula Studies; alas, despite efforts by my distributors in Germany and the UK, sales remained at a minimum. A few connoisseurs, however, appreciated the book, such as game designer and Ennie Award Winner Kenneth Hite. It also caught the eye of Daniela Diaconescu, Vice-President and co-founder of the Transylvanian Society of Dracula, who rewarded my discoveries with the Research Award of the TSD in August 2014.

For the next book publication, I was wiser, and teamed up with Dacre Stoker and John E. Browning; I also found found a literary agent who believed in the book and sold it to Overlook Press, New York. Powers of Powers attracted international attention; my article for Literary Hub was clicked 30,000 times in the first week. Alas, after three years of work, there was little time to sit back and enjoy the success, as the buzz around the book also reached Sweden: ten days after the official release on 7 February 2017, fantasy fiction afficionado Rickard Berghorn contacted me and pointed to Mörkrets makter, serialized in Stockholm in the summer of 1899. Although I was already preparing my relocation to Asia, I dove into the backgrounds of the Swedish story and managed to make a stunning find about the origins of the Swedish preface. Meanwhile, Powers of Darkness was praised by reviewers at the New Tork Times, the Guardian, the Times Literary Supplement and a dozen other publications. Both my translation and my research into Makt myrkranna earned me the Lord Ruthven Award as a "special recognition," granted at the start of 2018.

To this book I added only one chapter: "Count Dracula's Lifetime Identity and Address," based on my presentation at the Dracula Workshop of the BBEC Conference in Timișoara, 25-27 June 2015, organized by Marius Crișan. I submitted my manuscript in May 2016; after several rounds of review and editing, the complete volume was published by Palgrave Gothic/Springer in November 2017 under the title Dracula—An International Perspective.

I am happy to have participated in this ambitious project, next to Bill Hughes, Carol Senf, Clive Bloom and other serious researchers. Some pages from my chapter can be previewed on Google Books.

I started working on this book already in October 2012; I visited london, Dublin and was in Romania over a dozen times to explore routes and make photos. In 2013, I invited Dacre Stoker to join me and together we made a promotion tour through Romania in November of that year. Alas, our publishing efforts were crossed by the discovery of the serialization of Makt myrkranna, then that of Mörkrets makter; from January 2014 on, I focused on the Nordic variants of Dracula. I kept visiting Romania, however, and in November 2019, I updated the complete text. I am still considering my options to publish the book in digital form, as print-on-demand or to try and find an established publisher.

There also is an English-language audio-book version of Powers of Darkness.

Mini-edition of the POD manuscript

Teaser campaign for Powers of Darkness — based on Dracula (1931) stills 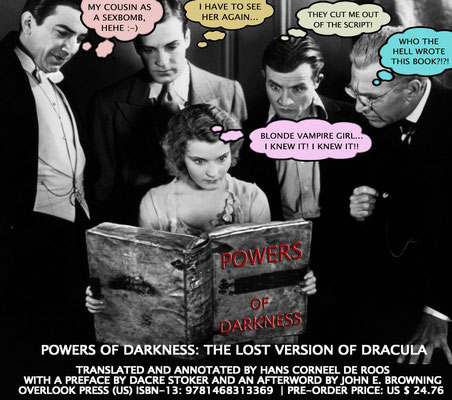 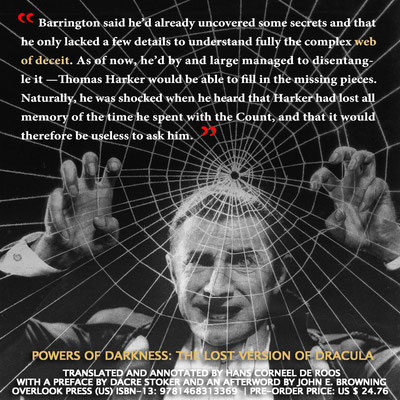 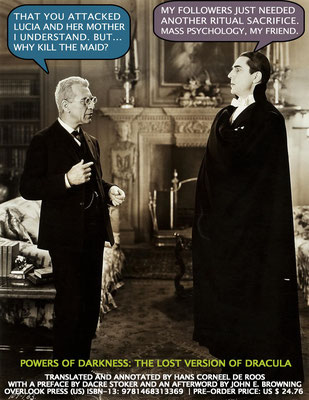 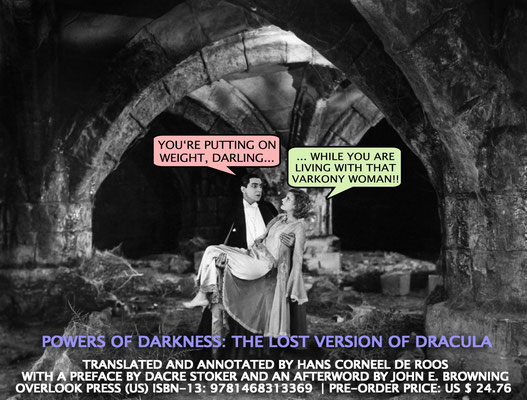 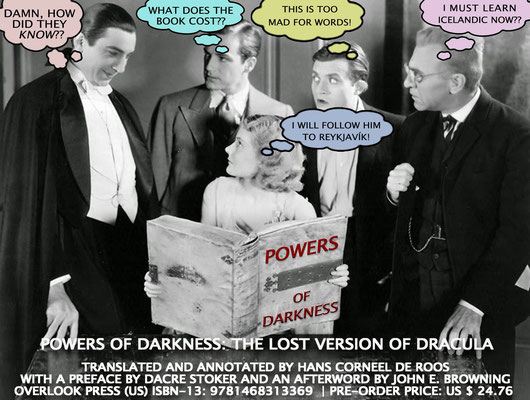 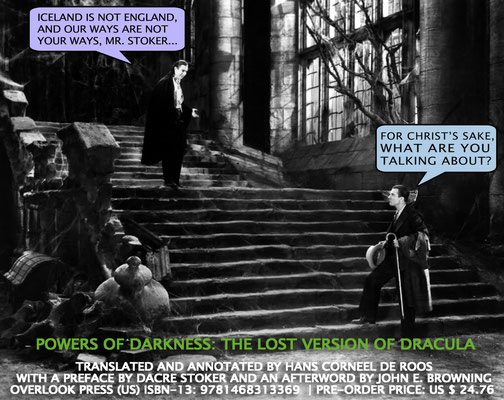 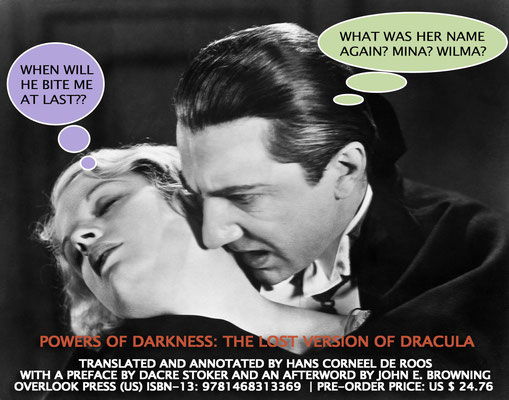 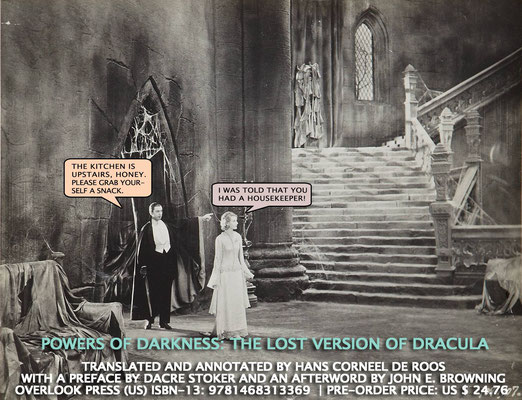 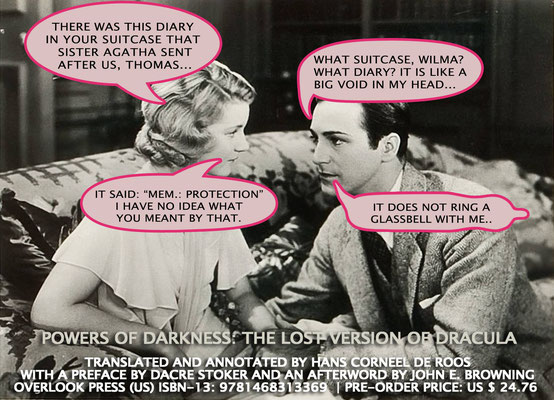 Pay here to get the book with Swedish Dracula drawings :-)

Pay with your PayPal account, your credit or debit card, or by bank transfer. Please also send me a short message with your phone number - it is easier and safer for shipping if the delivery service can leave you a message!

18 Euros for the book

If you check out via PayPal twice and pay  60 USD or 50 Euros in total, you will receive three books instead of two!

XL orders: your name printed in the book: No longer available :-(

As the book has already been printed, I can no longer offer this option, alas!

As an alternative to Paypal, you can open a free WISE account to save lots of money on all your international money transfers! While banks may take up to 10% for currency conversions by giving you bad exchange rates, WISE charges on average 0.7% using the interbank exchange rate. If you click this link, your first transaction will be for free! If you want to use WISE, please send me a short message through the contact form, so that I can give you my bank details.

TIP: If you have an US$ account, pay in $, if you have a Euro account, pay in Euro, to avoid currency conversion costs. If your account is in another currency, and you make several international money transfers each year, you might want to consider a WISE account.


PLEASE WRITE YOUR NAME AND YOUR SHIPPING ADDRESS HERE*, OR ASK ME FOR MY BANK DETAILS, AND SEND OFF THE FORM. THANK YOU!

* If it is different from the PayPal shipping address that you used while paying with PayPal.

OTHER DRACULA-RELATED WEBSITES I CREATED: